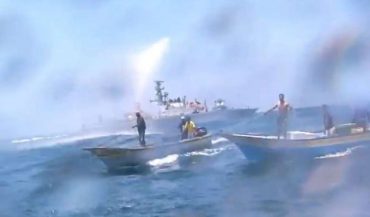 GAZA, November 1, 2016 (WAFA) – Israeli navy on Tuesday detained six Palestinian fishermen and seized their boat while they were sailing offshore Gaza, according to local sources.

WAFA correspondent said that several Israeli naval boats attacked with gunfire a number of fishing boats while sailing offshore the coast of Gaza, before they detained six fishermen who were on board and seized one boat.

The fishermen were taken to southern Israel seaport of Asdoud.

Israeli navy targets Gaza fishermen almost on a daily basis, in a blatant breach of a ceasefire agreement reached between Israel and armed Palestinian groups in august 2014, following 51 days of bloody aggression on the Gaza Strip, which claimed the lives of over 2.200 Palestinians, mostly civilians.

According to the Palestinian Center for Human Rights (PCHR), all Israeli attacks on Palestinian fishermen have taken place within the distance of six nautical miles, which it said “proves that Israeli forces’ policies aim to tighten restrictions on the Gaza Strip’s fishermen and their livelihoods.”