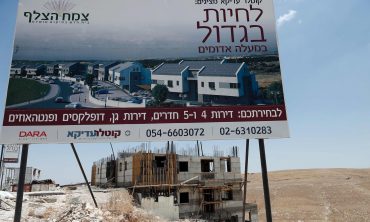 A construction site in the Israeli settlement of Maale Adumim,

“The tone of the annual Heads of Mission report on Jerusalem, written after several months of violent attacks in the city and the West Bank and kept secret until now, is in marked contrast to the recent report by the international Middle East quartet of the US, EU, Russia and the UN”.

Heads of Mission report on Jerusalem, kept secret for six months, calls for more efforts to halt trade with settlements

The EU has sidelined a call from its most senior diplomats in Jerusalem to step up efforts to halt trade with Jewish settlements in occupied territory despite Brussels’ repeated public protests that the settlements are illegal and threaten the prospects for a two-state solution.

The diplomats said labelling of produce from settlements in European supermarkets should be more strictly enforced. They also called for further EU guidelines on not recognising the settlements as part of Israel.

The report, seen by the Guardian, underlines the worsening “despair … anger and a loss of hope in the future” among Palestinians in Jerusalem; it has twice been considered by senior officials of the 27 EU governments in Brussels, but no action has been taken on its recommendations since it was produced at the end of 2015.

The tone of the annual Heads of Mission report on Jerusalem, written after several months of violent attacks in the city and the West Bank and kept secret until now, is in marked contrast to the recent report by the international Middle East quartet of the US, EU, Russia and the UN.

The quartet report angered Palestinian leaders by laying equal – if not greater –emphasis on Palestinian “incitement” as on Israeli settlement policies. The EU diplomats say those policies in Arab East Jerusalem and the West Bank are “illegal in international law” and “seriously call into question [Israel’s] commitment to a negotiated agreement with the Palestinians”.

The EU diplomats “firmly condemn” all attacks on civilians, Israeli and Palestinian. Thirty-five Israelis have been killed in attacks by Palestinians since last September while more than 200 Palestinians, mostly attackers or would-be attackers of Israelis, have also been killed.

But noting the worsening of “the polarisation and violence” last year, the report says that “at the root of the negative trends … is the occupation … and a long-standing policy of political, economic and social marginalisation of Palestinians in Jerusalem in violation of Israel’s obligations under international humanitarian law”.

The diplomats recommended that EU governments:

These have not been adopted.

Besides continued settlement in Arab East Jerusalem – which intensified again this month with an announcement by Binyamin Netanyahu’s government of 840 new Jewish homes in East Jerusalem and 560 in nearby Maale Adumim – the report says only 7% of all building permits in Jerusalem go to Palestinians; Palestinian neighbourhoods get less than 10% of the city budget despite comprising 37% of the population and Palestinian child poverty is 84% compared with 45% among Israeli families.

Reviewing the violence up to the end of 2015, the diplomats were “deeply concerned by incidents involving apparent excessive force” by Israeli security forces – “possibly amounting in certain cases to unlawful killings” – in response to “protests and security incidents”. In some cases Palestinian perpetrators of individual attacks had “apparently been shot and killed in situations where they were no longer posing a threat”.

The report also says that Palestinian fears that Israel is seeking to change the historic status quo over the Temple Mount/Haram al-Sharif holy site – which Netanyahu denies – are fuelled by calls from rightwing extremists and politicians to allow free Jewish access to the esplanade housing the Al-Aqsa mosque and the Dome of the Rock Muslim shrine.

Previous annual Jerusalem reports heavily contributed to the 2013 ban on EU public funding to the settlements and the later guidelines on business risks.

But while EU officials could still revisit the latest recommendations, EU sources suggested that implementation is now unlikely given the long delay.

Federica Mogherini, the EU’s foreign policy chief, is not thought to be an ardent advocate at present of further practical steps to enforce differentiation between Israel and Israeli settlements, while one previously strongly pro-Palestinian EU member, Greece, is said to have shifted its position, seeking better economic and diplomatic relations with Israel.

The diplomats do not specify what “further guidelines” they would like enacted. But a European council of foreign relations report last year suggested settlements should no longer benefit from integration between EU and Israeli banks, from charitable status applied to European organisations funding settlements, and the validity in EU countries of Israeli legal documents issued in the occupied territories.