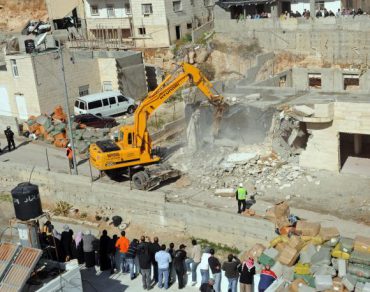 JERUSALEM, October 26, 2016 (WAFA) – Crews from the Israeli municipality in Jerusalem demolished on Wednesday a four-apartment building in the Palestinian neighborhood of Silwan under the pretext of construction without permission, according to owners of the building.

Israeli police accompanied by bulldozers broke into the area in the early morning hours and proceeded to demolish the building owned by four brothers from the Ja’afreh family displacing as a result 30 individuals.

Issa Ja’afreh, owner of one of the apartments, said he and his brothers have been fighting the demolition order for nine years hoping to get a building permit but to no avail.

He said that the families were surprised by staff from the Israeli municipality informing them on Tuesday that the building will be demolished and that they will have pay demolition costs estimated at nearly $40,000.

Only 14 percent of East Jerusalem land is zoned for Palestinian residential construction, while one-third of Palestinian land has been confiscated since 1967 to build illegal Jewish-only settlements, according to the Association for Civil Rights in Israel (ACRI).