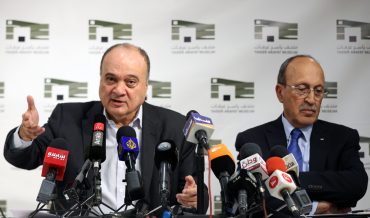 He said the museum, which is built near Arafat’s mausoleum in Ramallah,  will open on the 12th anniversary for Arafat’s death.

The overall construction of the museum, according to Alkidwa, took a total of six years; four years for the building construction and two years for the completion of interior works. He cited lack of Palestinian expertise and funds as main reasons for the long period of construction.

He estimated the total construction costs at $7 million covered by successive Palestinian governments.

The museum contains an electronic information center, a small specialized library, a hall for variable exhibitions and an auditorium.

The museum, dedicated to the preservation of contemporary Palestinian national memory, is connected to Arafat’s main office and command headquarters and overlooks his temporary mausoleum in the muqata’a.

It is supervised by the Museum Committee, headed by Nabeel Kassis, and operated by a team of professionals headed by the Museum’s Director Ahmad Soboh. The museum was designed and displaced by Egyptian expert Hussein Shaboury.

Highlighting the museum vision in his speech, Kassis said the museum is aimed to present to the world and Palestinian people and document the contemporary narrative of the Palestinian national movement through the life and work of Arafat within an educational and cultural setting.

He added the display area of the museum consists of four ascending ramps. A bridge connects the new building with the office of Arafat, where he withstood 34 months of siege by Israeli military. The innate character of the besieged area has been preserved to provide visitors with an immediate, authentic visualization of the conditions at the time of the siege.

He highlighted the complexity of collection process over time, especially the destruction of some of Arafat’s personal archive in Gaza following Hamas takeover of Gaza in 2007.

He noted that Yasser Arafat Foundation managed to retrieve some of Arafat’s possessions and archive, including the Nobel Peace Prize medal from Gaza through cooperation with Hamas.

He pledged that the foundation would continue to exert efforts in order to restore and archive all of Arafat’s possessions and archive.