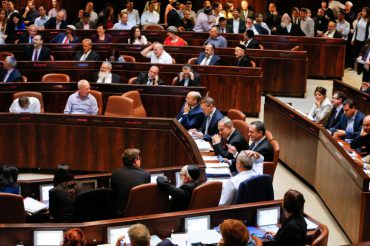 RAMALLAH, November 17, 2016 (WAFA) – Palestinian Arabic dailies focused in their Thursday issue on the preliminary approval by the Israeli parliament, Knesset, of a bill to retroactively legalize illegal settlements in the West Bank.

Al-Quds and al-Ayyam said a bill to retroactively legalize illegal settlements passed its first Knesset reading on Wednesday afternoon with the support of the Kulanu Knesset faction of Finance Minister Moshe Kahlon.

Al-Hayat al-Jadida and al-Al-Ayyam said the Israeli municipality of West Jerusalem asked the Supreme Court of Israel to approve the demolition of 14 Palestinian-owned homes in the Jerusalem neighborhood of Beit Hanina, in response to the court’s decision to evacuate the settlement outpost Amona, northeast of Ramallah.

Al-Quds said the Jewish organization Ateret Cohanim has submitted a lawsuit asking for the eviction of nine Palestinian families from their homes in Jerusalem neighborhood of Silwan.

Al-Quds and al-Ayyam said a woman was killed and three security personnel injured in an exchange of fire between Palestinian security forces and “outlaws” in Nablus city, north of the West Bank, on Wednesday.