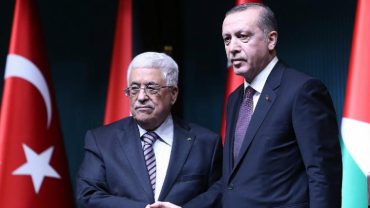 RAMALLAH, October 25, 2016 (WAFA) – The meeting in Ankara between President Mahmoud Abbas and his Turkish counterpart Recep Tayyib Erdogan was highlighted with photos on the front page of the three Palestinian Arabic dailies on Tuesday.

Al-Hayat al-Jadida made this subject it main front page story and said Abbas and Erdogan discussed the latest in the situation in the Palestinian territories. The meeting was also covered in al-Quds and al-Ayyam.

Al-Quds reported on a Jewish group called “Returning to the Mount” and said this group that is composed of Jewish terrorists seeks to ignite the region.

It added the movement’s leaders are pushing toward a new catastrophe against the Palestinian people and said the Israeli High Court has warned of real danger against the mosque compound.

It reported Arab League as slamming Netanyahu’s announcement about his personal participation in the digs as a “qualitative escalation” against the mosque.

While al-Quds highlighted rising tensions at the mosque compound, al-Ayyam opted to cover Israeli strikes on the blockaded Gaza Strip.

It said Israeli warplanes targeted a Gaza location after a rocket allegedly had been launched from the Gaza Strip on Israel, noting that the rocket did not land in Israel. Al-Ayyam explained that the targeted area is in Beit Hanoun.

The remarks made by Israeli Defense Minister Avigdor Lieberman during a rare interview with the Palestinian newspaper al-Quds also hit the front page headlines in al-Quds and al-Hayat al-Jadida.

Al-Hayat al-Jadida reported in this regard the Palestinian Journalists Syndicate criticizing the al-Quds for conducting this interview.

Al-Quds and al-Hayat al-Jadida covered Israeli forces and settlers’ assaults against Palestinians across the West Bank.

Both dailies said Israeli forces stormed the family home of a Palestinian who had been killed in January in the Hebron town of Sair.

Al-Quds added settlers seized Palestinian farmland in the Salfit district town of Kufr al-Dik, while al-Hayat al-Jadida said a total of 24 Palestinians were detained in overnight raids across the West Bank.