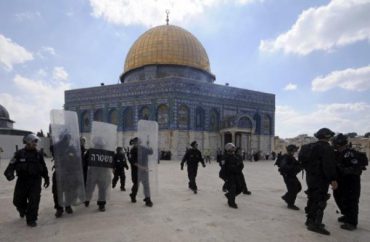 Al-Quds talked about this subject but at the bottom of its front page while at the same time highlighting in the middle of the page statements by the director of Al-Aqsa Mosque Omar Kiswani saying: “Settlers’ intrusions during the Jewish holiday have become a nightmare.”

The top front page story in al-Quds talked about arrest of members of a cell in Nablus suspected of planning to “assassinate” three Fatah leaders in the northern West Bank city. The paper quoted Nablus governor Akram Rjoub confirming the arrests and saying that they are being interrogated regarding “a difficult, complicated and large security matter.”

Al-Ayyam reported on the same subject and said in a colored headline that the group had planned to carry out assassinations in Nablus with a goal “to disrupt public security and peace.”

Another main front page headline in al-Ayyam said settlers set up tents in an outpost in the Jordan Valley and occupation forces raid and close roads in Husan and Nahalin, villages in the Bethlehem area.

A top front page headline in al-Quds talked about the new Jewish outpost in the Jordan Valley and printed a picture of the settlers setting it up.

It however also said in the same story that Israeli soldiers took measurements for the Abu Sbeih residence in al-Ram neighborhood, just outside the Jerusalem wall, in apparent preparation to demolish it. Misbah Abu Sbeih shot and killed on October 9 two Israelis, including a police officer, in a Jerusalem attack. He was shot and killed.

Al-Ayyam highlighted as well reports that the Israeli army had admitted to shooting dead Palestinians when they could have been arrested without shooting them.

Al-Hayat al-Jadida printed an exclusive story on its front page about arrest of a Palestinian after returning from Jordan with fake clearance invoices that he was planning to sell in the Palestinian areas. Businesses get reimbursed for the value added tax they pay on imported goods.

It also quoted Saeb Erekat, secretary general of the Palestine Liberation Organization, denying statements attributed to him about the situation in Syria.

It also printed a story about the near opening of Yasser Arafat Museum in Ramallah.