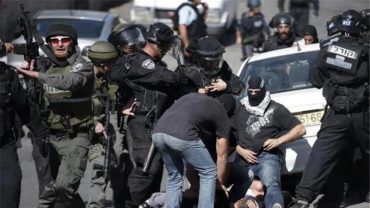 RAMALLAH, October 13, 2016 (WAFA) – The three Palestinian Arabic dailies highlighted in their Thursday issue renewed clashes between Israeli troops and Palestinians across Jerusalem district and the killing of a Palestinian child east of Khan Younis.

The dailies said Israeli forces shot and injured many Palestinians and detained a number of others during the clashes across Jerusalem district.

Israel tightened restrictions and increased harassment of Palestinians across Jerusalem after the Yom Kippur Jewish holiday.

Al-Ayyam said over 3,000 Israeli police officers were deployed across Jerusalem and that Jewish settlers attempted to perform religious rituals at the mosque compound.

Al-Quds described Israeli restrictions on and harassment of Palestinians across Jerusalem during Jewish holidays as a “nightmare.”

Al-Ayyam reported a number of Palestinians suffocated as Israeli forces showered them with tear gas canisters during a raid into Zabbouba village, west of Jenin, in the northern West Bank.

The dailies said an investigation committee found that the death of a Palestinian woman in Beit Jala government hospital was not the result of medical negligence.

Al-Hayat al-Jadida reported family of Ali Shiokhi as saying that their son was shot dead by Israeli forces while he was on his way to buy a medicine for his mother.

Shiokhi, 20, was killed by Israeli troops during a raid into the Jerusalem town of Silwan. He was reportedly shot by a live bullet in his pelvis and left to bleed to death.