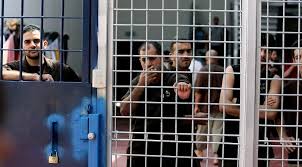 RAMALLAH, November 22, 2016 (WAFA) – The sentencing of two Palestinians by an Israeli court to imprisonment for carrying out stabbing attacks hit the front page headlines in Palestinian dailies.

The three dailies said an Israeli court sentenced Subhi Abu Khalifa, 19, who comes from Shufat refugee camp in Jerusalem, to 18 years of imprisonment and fined him 150,000 shekels (about $40,000) for carrying out a stabbing attack that left two Israelis injured in Jerusalem in October 2015.

Al-Ayyam and al-Hayat al-Jadida added thay an Israeli military court sentenced Mayson Mousa, 22, who comes from Bethlehem, for 15 years in prison for carrying out a stabbing attack at a major checkpoint between Bethlehem and Jerusalem on June 29.

While the imprisonment sentences was the common news item in the dailies, al-Quds opted to highlight the shooting of a Palestinian in its main front page news item.

It said Israeli forces shot and injured a Palestinian worker in the Wadi Abu al-Hummus area, east of Bethlehem.

The man, identified as Mahmoud Salah, 31, was shot and injured for attempting to cross from Bethlehem into Jerusalem for work.

It added Israeli forces seized five containers loaded with machinery and goods during a raid into al-Manshiya area, east of Bethlehem, in the southern West Bank. The containers reportedly belonged to Naim Salahat. They had car parts, machines and other goods.

Al-Quds highlighted the isolation of two Palestinian villages by the construction of Israel’s apartheid wall.

It said a total of 550 Palestinians in the Qalqiliya district villages of al-Ramadin and Abu Farda are only allowed to have access into and out of their villages through a so-called “security gate”.

Spotlighting widespread condemnation of the Israeli bill that would ban the Muslim call to prayer (adhan) from playing over loudspeakers, al-Quds reported member of Knesset Ahmad Tibi as pledging ongoing struggle against the bill.

He was also reported as stating that the resumption of Israeli-Palestinian talks under the current situation is “absurd and futile”.

Highlighting expansion of land grab in Hebron’s Old City, al-Quds said Israel has seized and started construction works at the playground of the Ibrahimi School.

Furthermore, al-Quds and al-Ayyam said hundreds of UNRWA employees went on a general strike in the organization’s main offices in Gaza city and the West Bank, protesting UNRWA administration’s failure to meet their demands regarding wages and unfilled job vacancies.

Referring to a report issued by the Applied Research Institute of Jerusalem (ARIJ), al-Quds said 49% of the area occupied by West Bank Israeli settlements is privately-owned Palestinian lands.

Al-Ayyam and al-Hayat al-Jadida said the installation of a wall which would isolate Ein al-Hilweh, the largest Palestinian refugee camp in Lebanon, southeast of Sidon city, by Lebanese authorities caused widespread dismay