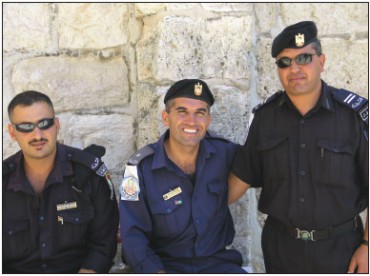 The Palestinian officers had the opportunity to get a better understanding of the Austrian model in dealing with the community in a proactive manner that would eventually contribute in crime prevention, said the release.

During the three-day study trip, which was organized and funded by EUPOL COPPS Mission, the participants received information about the experience of their Austrian counterparts, especially  subjects dealing  with the concept of citizen-oriented policing, based on the notion that the public play a role in maintaining public safety. With the help of the community police can identify their concerns and offer solutions.

The attendees visited the Federal Office of Criminal Investigation and the Public Advice Service of Police. They also visited the Security Academy (SIAK) of the Austrian Ministry of the Interior in Vienna.

The officers also visited a police station in Bad Gleichenberg to see for themselves how the police interact with children as well as attending a lecture in a school on traffic related issues, including the “Children-Police” project.

At the end of the study trip, the participants were briefed by their Austrian counterparts about necessity to interact with various public institutions such as shelters for victims of domestic violence, mainly females and minors.