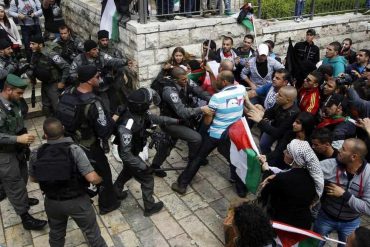 Addressing a conference sponsored by the Association of Norwegian NGOs for Palestine, Ashrawi called for immediate international intervention to ensure the protection of the Palestinian people, their land and resources and the urgent need for governments worldwide to recognize Palestine in the immediate future, said the statement.

Ashrawi provided the professionals, scholars and activists at the conference held at Akershus University College in Oslo, Norway, with a critical assessment of the deterioration of conditions on the ground and Israel’s illegal and discriminatory policies and the nature of its present coalition, as well as contemporary developments in the region and beyond and their impact on Palestine.

She stressed the importance of all forms of nonviolent resistance to stand up to Israeli violations, particularly the illegal Jewish-only settlements and settlement outposts on stolen Palestinian land.