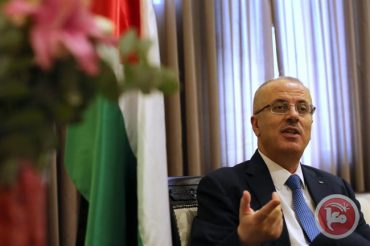 Palestinian Prime Minister Rami Hamdallah at his office in Ramallah

BETHLEHEM (Ma’an) — Palestinian Prime Minister Rami Hamdallah released a statement Tuesday condemning Israel’s recent announcement to increase financial support by 50 million shekels ($12.8 million) to the illegal Kiryat Arba settlement and Jewish settlers in the occupied West Bank district of Hebron, saying the move “underscores Israel’s true intentions.”Hamdallah said that the continued development of Israel’s illegal settlements had revealed the lack of credibility of Israeli leaders who claim they support a two-state solution amid a renewal of international peace initiatives to resolve the Israeli-Palestinian conflict.“The only purpose [of supporting the two-state solution] is to divert the international community from Israel’s true intention: making the creation of a Palestinian state impossible and maintaining the brutal occupation of the Palestinians indefinitely,” the statement read.Hamdallah added that the government’s decision came on the heels of a report published by the Middle East Quartet which cited Israel’s settlement enterprise as one of the major obstacles to peace in the region, unraveling Israel’s public support for a two-state solution as hollow rhetoric.The prime minister also slammed Israel’s decision to increase financial support to settlements just under a week after the Israeli government approved the construction of 140 homes in the settlement of Ramot in occupied East Jerusalem and 100 for the Har Homa settlement in southeastern Jerusalem, while also retroactively legalizing a settler outpost.Israeli Prime Minister Benjamin Netanyahu and Defense Minister Avigdor Lieberman also approved plans to construct 560 new housing units for Jewish Israelis in the illegal settlement of Maale Adumim, as far-right lawmakers announced their intentions to introduce legislation to annex the settlement to Israel.“Once again, the Israeli government’s support for the illegal settlements and their extremist inhabitants makes it clear who the aggressor is,” Jamal Dajani, Director of Strategic Communication and Media at the Palestinian Prime Minister’s Office, said in the statement.“Israel tries to portray itself as a victim, when the real victims are the Palestinians. They are the ones who are having their land stolen, their future taken and who are being killed by violent settlers and trigger-happy soldiers,” Dajani added.Netanyahu fast-tracked government plans to expand illegal settlements in the West Bank following a series of attacks against Israeli settlers in Hebron in recent weeks which led to the death of two Israelis.Israeli leaders have claimed the expansion of Israeli settlements further into Palestinian territory serves to deter attacks, constituting one of a number of punitive measures imposed on the whole of the Palestinian population in the wake of attacks on Israeli settlers and military personnel.However, Palestinian leaders and rights groups have reiterated that such measures only serve to exacerbate tensions for Palestinians who have lived under a military occupation for nearly 50 years, while being systematically displaced as Israeli settlements continue to encroach further onto their lands.While all Israeli settlements in the West Bank and East Jerusalem are considered illegal under international law, settler outposts — oftentimes established in locations that create corridors between larger settlements — are also considered illegal under domestic Israeli law. However, it is common for settler outposts to be retroactively legalized into official settlements by the Israeli state.