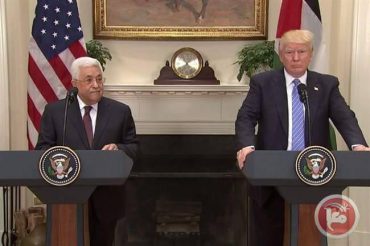 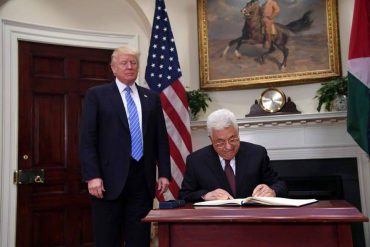 WASHINGTON, May 4, 2017 (WAFA) – President Mahmoud Abbas said on Thursday that US President Donald Trump is enthusiastic about peace and that he has a vision for a political solution for the Middle East conflict.

Speaking in an interview with Palestine TV, Abbas said he talked to Trump about Palestinian aspirations and position, such as “our position on terrorism, which was important to clarify to President Trump, and our position and vision on the two-state solution,” said Abbas.

“We also discussed many different issues, mainly how we can quickly start to solve the Palestinian issue,” Abbas remarked, adding: “The US president is interested and enthusiastic and has a vision for a political solution, and we are going along with him to reach this solution.”

Abbas said there will be contacts after this meeting to arrange matters with the US administration, both in terms of bilateral relations and peace relations, explaining that Trump “is going to discuss this with others, and when the picture is complete for him and plan how to start, we will be ready to deal with it and work with him with all our force.”

On inviting Trump to visit the Palestine, Abbas said: “When I congratulated him on his success, I invited him to visit Bethlehem and wished he would visit us on Christmas as an important world figure. We mentioned the invitation again this time and God willing he gets the chance to visit the Holy Land.”