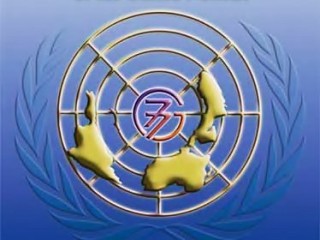 Representatives of 134 countries elected the State of Palestine as chairman of the Group of 77 and China during the 42nd meeting of the Group’s foreign ministers.

Palestine will take over the presidency of the group on the first of January.

The State of Palestine, while presiding over the group of 134 countries representing 80% of the world’s population, will take over the leadership of the group and negotiate with the other partners and member states of the organization on all the developmental, humanitarian and legal issues on the agenda of the United Nations 2019, such as climate change, the final document of the Financing for Development Forum, as well as the Ministerial Declaration of the Ministers for Foreign Affairs of the Group of 77 and China, including reforming the United Nations development system and the numerous annual forums such as the United Nations Forum on Forests as well as the specialized committees such as the United Nations Commission on Women, the United Nations Committee on Statisticians and many other topics on which Palestine is supposed to lead the efforts of the Group of 77 and China both in presenting the group’s point of view in the topics discussed, or in reaching the best results while negotiating outputs related to these topics.

In addition, the State of Palestine will continue to work for ensuring the implementation of the 17 internationally agreed development goals, first and foremost the fight against poverty in all its dimensions as hundreds of millions of people around the world are still living below the poverty line in order to achieve sustainable development.