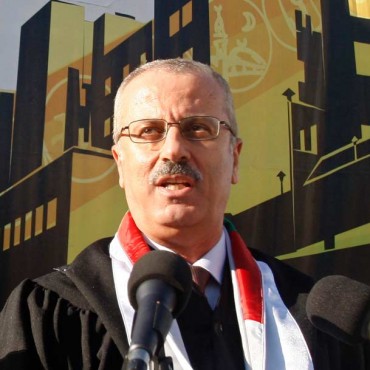 Hamdallah made these remarks during separate meetings with the United Nations Special Coordinator for the Middle East Peace Process, Robert Serry, and the European Union Representative, John Gatt-Rutter, at the Prime Minister’s Office in Ramallah.

Hamadallah briefed both Serry and Gatt-Rutter on the Israeli occupation’s violations against the Palestinian people in the West Bank, particularly the recent killing of Issa al-Qatri, 23, who succumbed to his wounds he sustained after being shot in the chest by Israeli occupation forces in al-Am‘ari refugee camp, near Ramallah.

He also briefed them on the arbitrary policies adopted by the ‘Israeli Prison Service’ against Palestinian prisoners detained in Israeli jails; policies that have resulted in the recent [mysterious] death of Raed al-Ja‘bari, 35, in an Israeli hospital.

The premier also kept them abreast of the latest efforts made by his government in preparation for the Gaza reconstruction conference slated to be held in Cairo during October, affirming the government’s commitment to provide financial and in-kind support for the Palestinians in Gaza in coordination with all relevant sides.

He expressed his gratitude for the UN and EU’s efforts in terms of providing humanitarian assistance to Gaza population, stressing the importance of doing so in cooperation with the national consensus government.