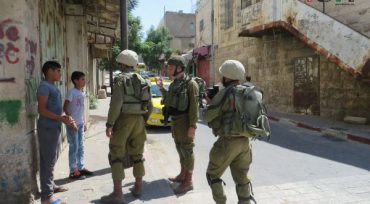 The law is aimed at children that commit acts of “terrorism” and as such, targets children from East Jerusalem.

“The new law shows a total disregard for children’s rights, when the children in question are Palestinians,” Hamdallah said. “We need more laws to protect Palestinian children, not laws to criminalize minors.”

Last year, the Israeli Knesset passed a bill which legalizes the imprisonment of Palestinian children from East Jerusalem for up to 20 years for throwing stones. It also allowed Israeli juvenile courts to impose fines of up to NIS 10,000 on the families of children convicted of “terrorist activities,” as a form of collective punishment.

Palestinian children from the West Bank are subject to Israeli military law, which already allows the imprisonment of children as young as 12 years of age. This makes Israel the sole country in the world where children are systematically tried in military courts and subject to torture, inhumane treatment and punishment, according to a report by UNICEF.

“Israel’s treatment of Palestinian children is a violation of Article 37 of the Convention on the Rights of the Child, which states that no child shall be subjected to torture or cruel, inhumane or degrading treatment or punishment,” said Jamal Dajani,  Director of Strategic Communications and Media at the Prime Minister’s Office.

“No child in the world – neither Palestinian nor Israeli – should be subject to violent interrogations, solitary confinement and death threats,” Dajani added.

Palestinian children are often arrested at night, blindfolded and transported to Israeli prisons outside of the West Bank, in violation of article 76 of the Fourth Geneva Convention. In 97 percent of the cases, children have no access to a lawyer during the interrogation and their parents are prevented from being present, according to a report by Defense for Children International-Palestine.

Eighty six percent of the children endure some form of physical violence following their arrest, including beating, kicking and violent shaking. At the end of the interrogation, the children are forced to sign ‘confessions’ in Hebrew, a language that most of them don’t speak.