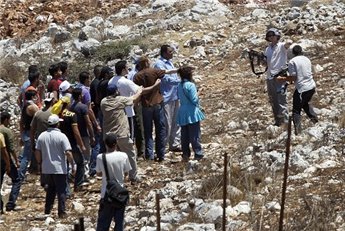 HEBRON, August 28, 2014 (WAFA) – A Palestinian youth was injured on Thursday after an Israeli settler deliberately ran him over at a road near the village of Beit Ummar, to the north of Hebron, according to local sources.

Spokesperson for the anti-settlement committee in the village, Mohammad Awad, said the settler, driving a bus, deliberately ran over Montaser Harub, 25, from the nearby village of Kharas while he was at the entrance of Beit Ummar.

Witnesses said they forced the bus’ driver to stop before an Israeli army patrol arrived at the scene and ordered the driver to drive away, unabated by the assault.

Harub received first aid at the scene and was later transferred to hospital for medical treatment, where his case was described as moderate.