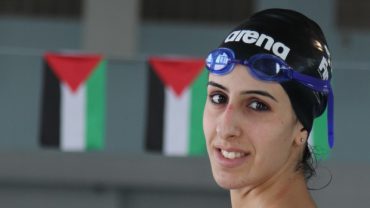 freestyle at the Summer Olympic Games in Rio. (Derek Stoffel/CBC)

When Palestinian swimmer Mary al-Atrash dives into the pool at the Summer Olympics in Rio, she’s not aiming to bring home a medal.
A winning performance will mean telling the story of the Palestinian people and the difficulties they face, not only in preparing for the Games, but also living in the Israeli-occupied West Bank.
“I’m very proud to be going to Rio. And to represent Palestine,” Atrash told CBC News. “I also have the responsibility of highlighting that we are living under great difficulties.”
Cindy Klassen opens women’s sports centre in West Bank
CBC: Rio 2016
Six Palestinians will compete during the Games, which run from Aug. 5 to 21. Atrash is one of two swimmers. Two runners are also part of the team, which is rounded out by one competitor in dressage and one in judo.
The International Olympic Committee invited Palestinian athletes to first compete in the Summer Olympics in 1996 in Atlanta, as part of a program to include participants who do not meet the qualifying criteria.
Atrash swims in the 50-metre freestyle, but her best time of 29.91 seconds is more than four seconds slower than the 25.28 qualifying time needed to compete in the Olympics.
“It’s difficult because of the lack of resources for us here. It will be very difficult to win a medal,” Atrash said.
There is no Olympic-sized swimming pool in the Palestinian territories that Palestinians are allowed to use, so Atrash practises at the YMCA in Beit Sahour, near Bethlehem. The pool is 25 metres long, half the length of the facility she’ll compete in at Rio.
‘Harder to practise’
Most Palestinians are unable to travel into Israel, where sports facilities are larger and more modern, because of the long-running Israeli-Palestinian conflict.
“Because of all the difficulties that Palestinians live under … it makes it harder to practise and compete in our sports,” said Atrash.
Beyond travel restrictions, Palestinians face checkpoints and a scarcity of services such as sanitation, and in some areas clean water.
Israeli settlers blocking water access for Palestinians, UN says
Atrash’s coach, Mousa Nawawreh, said it’s important for Palestinians to compete in the Olympics.
“Our presence in any international event is important because it shows our ambition. It shows our strong will,” Nawawreh said.
For the Palestinian Olympians, telling the story of their people and the goal of achieving their own state is even more important than the medal count.
“It’s a good chance to represent Palestine, to tell the world that Palestine is there and that one day Palestine will be free,” said Palestinian sports journalist Umar Hammad. “To tell the world our story through sports, to tell the world our culture, our daily life.”
While soccer is by far the most popular sport among Palestinians, Hammad says he expects people in the West Bank and Gaza Strip to tune in to the Olympic broadcasts and cheer when the Palestinian team enters the stadium during the opening ceremony.
“There is a lot of pride in our team,” Hammad said. “Not to win medals, but to represent the Palestinian people.”
http://www.cbc.ca/