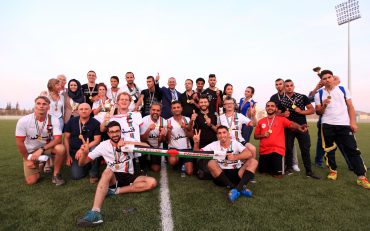 JENIN, October 18, 2016 (WAFA) – The British ‘Football for Palestine’ team, organized by the UK Lions Football Club, conclude a week-long tour of the West Bank with a friendly soccer match at the Arab-American University stadium in Jenin, according to a university press release.

It said the team visited the university and met officials who briefed them on the situation at the university and its academic programs, particularly plans to build the largest sports center in Palestine with a football stadium of international standards, multi-purpose sports arena and various fields.

The university team played a friendly football match against their British counterparts that ended with a 4-4 draw, according to the university’s press release.

The British team arrived in Palestine on October 9, however without five team members – two women and three men – who according to the group’s Facebook page were held at Tel Aviv airport for several hours before they were deported back to England.

While in Palestine, the team toured Jerusalem, Bethlehem, Hebron, Ramallah, Bil’in, Jericho and the Jordan Valley, Nablus and Jenin, where they held talks and played games against local teams in most of these cities.

The UK Lions FC said on the Football for Palestine website that the purpose of the tour was to raise funds for ‘MAP’- ‘Medical Aid for Palestinians’ and ‘Working with Villages in Palestine’ (formerly ‘Feed a Village in Palestine’) that help Palestinians living under Israeli occupation.

The money raised will help fund grassroots development projects in Palestine, it said.

The group concluded its tour on Sunday.