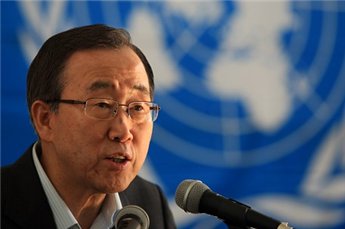 NEW YORK, August 7, 2014 (WAFA) – The United Nations Development Program (UNDP) joined the UN Secretary-General Ban Ki-Moon in his call for the root causes of this [Israeli-Palestinian] conflict to be addressed, including the lifting of the blockade on Gaza which has crippled efforts for human development and economic opportunity since 2007,” said the UNDP Administrator, Helen Clark, in a statement on Wednesday.

She underscored: “Living conditions in Gaza were bleak before the current crisis – now they are worse.  Instead of being able to move forward, the people of Gaza have been going through a period of “de-development.” Vast damage has been done to water and sewage systems, the power supply, schools, hospitals, roads and other infrastructure essential for social and economic sustenance, and human dignity.”

She stressed that “the people of Gaza have suffered for too long in a cycle of crisis and despair. Now is the time for transformative change towards the human development the people long for.”

“Such a transformation is within reach, but only with the concerted and sustained support of the international community, and with peace.”

“UNDP welcomes the current ceasefire and expresses its hopes for an agreement which ends hostilities and civilian suffering while also laying a foundation for sustainable peace,” said the statement.

“The UNDP is supporting the Palestinians to assess immediate needs and chart a path for recovery and human development,” added Clark.

“Nearly a month of armed conflict has claimed the lives of more than 1,800 Palestinians, including over 400 children. More than one quarter of the population of Gaza has been displaced. An estimated 65,000 people have seen their homes destroyed or severely damaged.”

“The tragic status quo cannot be sustained,” stressed the UNDP.