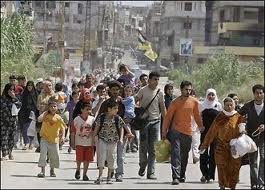 GAZA, July 29, 2014 – (WAFA) – As the Israeli military aggression against Gaza Strip entered its twenty third day, at least 115 Palestinians, including children and women, were killed early Tuesday, and around 220 were injured, bringing the death toll to at least 1231 and around 6720 injury cases.

Rescue teams recovered the body of Niveen al-Far from under the rubble of her house in al-Maghazi refugee camp in central Gaza, which was shelled at dawn and claimed the lives of three other Palestinians.

Meanwhile, 13 Palestinians were killed and 25 others were injured in Israeli heavy artillery shelling targeting east of Jabalia to the east of Gaza.

Israeli artillery violently shelled Palestinians homes with tens of missiles, killing 13 Palestinians, most of whom are from Balata family, as well as injuring 25 others.

In the meantime, Israeli artillery conducted intensive shelling against neighborhoods of Al Shajayieh, and al-Tofaha to the east of Gaza.

A 17-year-palestinian, whose identity is still unknown, was directly targeted while he was standing in front of his house in Bani Sahila area to the east of Khan Younis, killing him instantly.

Israeli tanks shelled civilians’ homes to the east of Jabalia, claiming the lives of eight Palestinians and injuring many others.

Israeli artillery shelling targeted Tuesday afternoon a poultry farm in Rafah, claiming the life of a Palestinian and injuring three others. The fatality was identified as Ijmi‘an Abu Shalluf, 20.

An Israeli warplane targeted a group of Palestinians in Rafah city to the south of the strip, killing two and injuring three others, including one extremely serious. Two of the fatalities were identified as Ayman Qishta and Ismail Shahin.

Meanwhile, a number of Palestinians were injured in several airstrikes that targeted Beit Lahia and Jabalia. They were transferred to Kamal Adwan Hospital in Jabalia for treatment.

In the meantime, an Israeli strike targeting a motorcycle in Rafah claimed the lives of two Palestinians.

Israeli strikes also claimed the life of leader of the Democratic Front for the Liberation of Palestine’s (DFLP) Wadah Abu Amir along with his wife and five children. Israeli shelling targeted the house of Abu Amir in Khan younis, killing him and his entire family.

Israeli shelling targeting a house in Al-Nuseirat refugee camp in central Gaza with a missile claimed the lives of two Palestinians and injured many others.

A journalist and his daughter were killed Tuesday in Israeli bombardment on northern Rafah in southern Gaza Strip. The fatalities were identified as Baha’ Ad-Din al-Gharib and his daughter Ola.

Earlier, Israeli warplanes pounded a three-storey home belonging to Abu Zeid family at Al-Jneini neighborhood in Rafah city, claiming the lives of eight Palestinians from Abu Zeid family and injuring 30 others, including 13 critical injuries. The fatalities were identified as Maryam, Filistin, Widad, Sham‘a, Ahlam, Abdullah (an elderly), Ahmad and Bisan.

The airstrike caused extensive property damage to the house as well as nearby houses. Palestinian rescue teams are searching for missing persons under the rubble.

Another airstrike targeted earlier a home in Al-Nuseirat refugee camp in central Gaza Strip, claiming the life of a Palestinian and injuring 15 others. The fatality was identified as Ahmad Mou’nes.

Israeli bombardment targeted a home inhibited by residents in Al-Bureij refugee camp in central Gaza Strip, claiming the lives of eight Palestinians, mostly children and women, and injuring others, including serious injuries. Palestinian rescue teams are searching for missing persons believed to be buried under the rubble.

Israeli warplanes targeted early Tuesday a home in Rafah city, claiming the lives of four members of Dheir family, including a child and an elderly, and injuring seven others, including a critical injury.

Two other Israeli airstrikes targeted early Tuesday two homes in Gaza city and in central Gaza Strip, claiming the lives of three Palestinians, including an elderly, while injuring seven others. The elderly fatality was identified as Suhayla al-Ja‘l, 70.