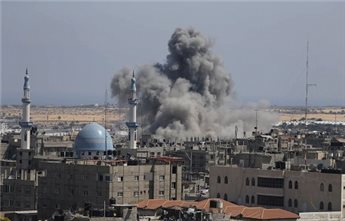 BETHLEHEM, July 15, 2014 (WAFA) – Israeli forces Tuesday arrested 12 Palestinians, including a member in the Legislative Council, during predawn raids in the West Bank districts of Bethlehem, Ramallah, and Hebron, in addition to three minors from Jerusalem, according to local and security sources.

Meanwhile in Hebron, Israeli forces arrested two Palestinians, ages 20 and 18. Soldiers also arrested two university students from Hebron after raiding their dormitory in the town of Abu Dis, east of Jerusalem, according to security sources.

In the meantime, confrontations erupted during the night in multiple areas in the neighborhood of Bab Az-Zawiya in Hebron, as well as in the village of Beit Ummar and al-Arroub refugee camp; army fired live ammunition, rubber-coated steel bullets, and tear gas canisters towards Palestinians, shooting and injuring several Palestinians as well as leading to several cases of tear gas suffocation.

The Prisoner Club said 1079 Palestinians have been arrested since Israel started its large-scale operation in the West Bank on June 12, following alleged disappearance of three settlers who were later found dead.

PPC said, since the beginning of the Israeli operation in West Bank,  267 Palestinians were arrested in Hebron, 186 Palestinians from inside Israel, 166 from Jerusalem, 117 from Nablus, 82 from Ramallah, 72 from Jenin, 37 from Tulkarm, 20 from Qalqilya, while 24 were arrested from Tubas, Salfit and Jericho.

Furthermore, Israeli police arrested three minors from the old city of Jerusalem while they were present at al-Aqsa Mosque. They were transferred to a nearby police station for interrogation.

A spokesperson for the Israeli Police said the minors were arrested for trying to fend off a provocative visit to the mosque by Jewish fanatics led by Rabbi Moshe Feglin, Deputy Speaker of the Israel’s Parliament, Knesset.