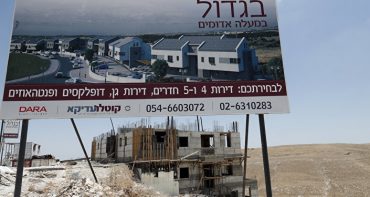 Saeb Erekat, secretary general of the Palestine Liberation Organization, condemned in a statement Israel’s decision to authorize the construction of 98 settlement units near the illegal Israeli settlement of Shvut Rachel intended to serve settlers who are expected to be removed from yet another illegal outpost.

He said that such decision affirms Israel’s resolve to destroy the two-state solution.

“Our position is clear and in line with international law: all Israeli settlements in the occupied State of Palestine are illegal and undermine the prospects of a negotiated two-state solution and the establishment of an independent and sovereign State of Palestine. Day by day the right-wing extremist Israeli government’s real intentions are unraveled by Israel’s lack of respect for international law,” he said.

Erekat reiterated Palestinians’ understanding that Israel’s ongoing settlement activities impede international efforts to achieve peace in Palestine and the region especially with complete inaction by the international community to hold Israel accountable for the crimes.

He said concrete measures and actions against all Israeli settlement activities should be taken in accordance with international law and United Nations resolutions.

The US administration also strongly criticized Israel for approving plans to construct a new settlement in the West Bank, saying it violates Israel’s pledge not to create new settlements.

The US found the timing of the announcement very ill, because Israel announced it so soon after the US agreed to a 10-year $38 billion military aid package to Israel.

The announcement also comes shortly after US President Barack Obama’s visit to Jerusalem last week to attend the funeral of former Israeli president Shimon Peres and after his meeting in New York with Israeli Prime Minister Benjamin Netanyahu.

United Nations Secretary?General Ban Ki-moon also condemned the decision as well as for the creation of a new industrial zone west of Ramallah.

He expressed concern that the establishment of a new settlement will make the prospect of a viable, contiguous Palestinian State more remote. “Settlements are illegal under international law, and such decisions run counter to Quartet recommendations,” he said in a statement.

Ban urged Israel to “halt and reverse such counterproductive decisions in the interest of peace and a just final status agreement.”

British Minister for the Middle East, Tobias Ellwood, condemned as well the Israeli announcement describing it as the “latest example of a series of worrying new settlement announcements in recent months.”

Ellwood affirmed that “settlements are illegal under international law.”

He said that “[a]s underlined in the July report of the Middle East Quartet, settlement activity undermines trust and makes a two state solution much harder to achieve.”

The Israeli government’s plan is to move Israeli settlers illegally residing in Amona, an outpost built on private Palestinian land, to the newly approved settlement, built on public land, which would initially have 98 houses and eventually could accommodate up to 300 houses.

Israel’s ministry of foreign affairs said in a statement issued on Wednesday that “the 98 housing units approved in Shilo do not constitute a “new settlement.”

Israel views Amona as part of Shvut Rachel, which lies within the boundaries of the illegal settlement, Shilo, north of Ramallah.

According to B’Tselem, the Israeli Information Center for Human Rights in the Occupied Territories, there are an estimated 547,000 Israeli settlers in the West Bank, living in around 125 settlements.

In addition, there are more than 100 illegal outposts that are not recognized by the Israeli government although they receive assistance.