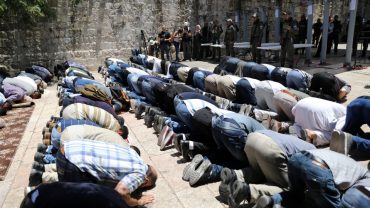 JERUSALEM, July 17, 2017 (WAFA) – Dozens of Palestinian worshippers Monday prayed in the alleys of the Old City of Jerusalem leading to Al Aqsa Mosque after they refused to enter the Muslim holy place going through metal detector gates recently placed at the mosque entrances by Israeli police.

Meanwhile, Jewish groups were allowed to roam the compound freely during the regular visit hours.

Islamic Waqf personnel in charge of Al-Aqsa compound refused to accept the new scheme for Al-Aqsa Mosque compound when police set up metal detectors outside the compound gates and forced anyone entering it to go through them first. As a result, dawn prayers were held outside the compound.

Sheikh Muhammad Ahmad Hussein, the Mufti of Jerusalem, told WAFA that Israel opened three gates to the mosque and installed metal detectors, which is an attempt to change the status quo at Al Aqsa Mosque, which recognizes it as a Muslim-only holy site.

He said this created a great discomfort and agitation among the thousands of Muslim worshippers seeking to pray inside the holy compound, many of whom have refused to pass through the metal detectors to enter the mosque.

Extreme Jewish groups used social media to publish photos of their entry to the compound and prayer as Muslims were banned from entering it, which threatens to raise tensions.

Meanwhile, Palestinians called for mass prayer at the gates of Al Aqsa compound especially the Maghreb and Isha prayers to protest the recent alterations, which they say violate freedom of worship and an attempt to control the mosque in a way similar to what happened with Ibrahimi mosque in Hebron.

Al Aqsa was closed for prayer since 7 a.m. on Friday when three Palestinians from Umm al Fahem, an Arab town in Israel, were killed after allegedly attacking and killing two Israeli policemen. It was gradually reopened on Sunday afternoon, making it the first time Friday prayer was not allowed at Al-Aqsa Mosque since 1969.

Hundreds of Palestinians gathered at Lions’ Gate, one of the gates that lead to Al-Aqsa Mosque, to pray the five prayers and express their rejection of the new police measures. Clashes erupted between the Israeli police and worshippers and several youth were arrested after being assaulted with batons and tear gas canisters.

Palestinians say Israel aims to humiliate Al Aqsa goers on entry and exist and send a message to Arabs and Muslims all around the world asserting its dominance.

Sheikh Wasif al-Bakri, a Sharia judge in Jerusalem, said “We support peace and Muslims have the right to enter the mosque freely and without any obstacles.”

He said Israeli police allowed the clergymen to enter without inspection, but when the masses tried to enter, they were demanded to use the metal detectors, which created tension.

The situation though remains tense at Al-Aqsa Mosque and outside the Old City wall as police barricades prevent people from reaching the Old City and shops to reopen their doors for business.